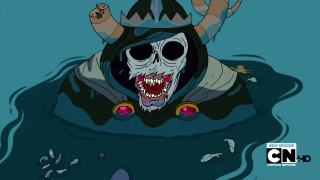 Adventure Time is a very strange show. The creators can use this to their advantage and show some truly terrifying stuff.