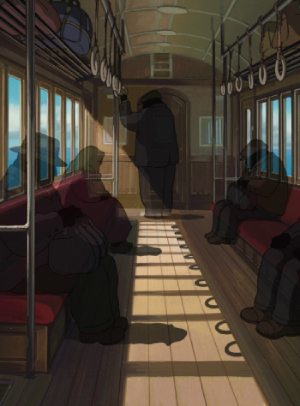 A recurring element in Oral Tradition and fiction. A sinister (or at least mysterious) phantom train beholden to no earthly schedule, often times in charge of transporting souls to the afterlife. A vehicular version of The Grim Reaper, then, minus the reaping (though that's not to say that the train that runs over people wouldn't be hilarious). Its conductor—if not the train itself—probably plays chess, too. Interesting in that trains are a relatively young technology, regarding mythology,[1] but they've acclimated extremely well. The spooky train whistle also helps.

May not actually be a train, but you get the idea. Video games love these things. If it is a train, it may qualify as a Cool Train. Sometimes overlaps with Ghost Ship. Has nothing to do with Soul Train, though it is often referred to as a soul train.

Examples of Afterlife Express include:

Retrieved from "https://allthetropes.org/w/index.php?title=Afterlife_Express&oldid=1955491"
Categories:
Cookies help us deliver our services. By using our services, you agree to our use of cookies.