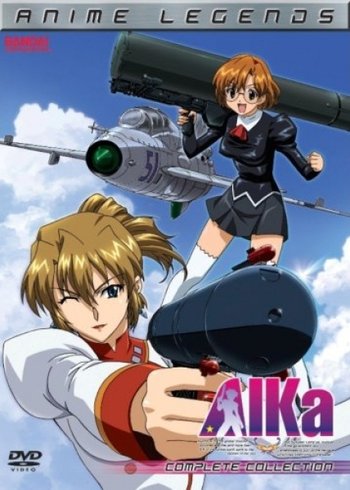 Agent Aika (or AIKa) is both the Ultimate Panty Shot Vehicle and definitive proof that Most Writers Are Male. There is also some plot - and it's surprisingly amusing.

Twenty Minutes Into the Future, the Earth has been ruined due to global warming; lots of places are now submerged deep under the sea. Enter Aika Sumeragi, a beautiful woman who works as a "Salvager" (scuba-divers hunting for valuables under the water) in a little family-owned company managed by the father-daughter team of Gonzo and Rion Anda. Since Gonzo's policy of good service for a low price manages to drive the company to bankruptcy, he decides to accept a high-paying mission: finding a material named Lagu (known in the Latin American subtitles as "Ragg").

After recovering the Lagu, Aika and Rion are captured by an oversexed White-Haired Pretty Boy named Hagen, who wants the Lagu so that he can bring about The End of the World as We Know It and repopulate the planet with his own descendants; to that end, he has created an army of scantily-clad and skilled women called the Delmo.

Aika has a secret, though: when she was younger, she was the victim of some nasty experiments, and as a result, she possesses a Super Corset that transforms her into a super-powered version of herself (that is all but naked). When Hagen discovers Aika's secret, he thinks she will do fine in his harem. After Aika rejects the prospect, she takes it upon herself to find a way to defeat Hagen, his even more disturbing sister, and his entire army; with the help of Rion, Gust (a salvager who has a crush on Aika), and the enigmatic spy Miss Maypia, Aika ends up saving the world and stopping Hagen's plans.

That's what happens in the first four OVA episodes; after these episodes proved popular, three more were created to capitalize on the success. In the last three episodes, the Delmo army -- deprived of any reason of existence following Hagen's death -- turns their attention towards Aika. They want to discover her secret and defeat her at all costs, and they will use any method they need -- including loli-looking doctors and Bifauxnens -- to accomplish the task.

There are two new series of OVA, Prequels where Aika is a teenager, called AIKa R-16: Virgin Mission and AIKa ZERO.

Najica Blitz Tactics -- by the same director of Aika/AIKa 16 (Katsuhiko Nishijima) and the same studio behind all of the Aika OVAs (Fantasia) -- has totally different characters and a wholly different plot, but for the most part displays the same level of Fan Service as that Aika does.

Tropes used in Agent Aika include: