Ai to Yuuki to Kashiwamochi 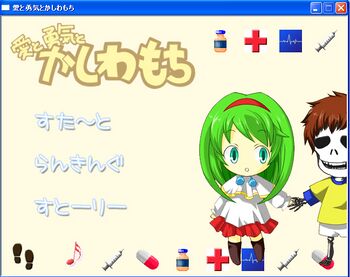 Ai to Yuuki to Kashiwamochi (literally Love, Courage, and Leaf-Wrapped Rice Cakes, translated as Love Mochi in the iPhone version) is a puzzle game about Ai-chan. She's just like any other girl. And she's also an Ill Girl who dreams of a stark, brown world containing all the sweets she could possibly want to eat (But what she really wants to eat is kashiwa mochi), and a boy named Yuki. The gameplay is very similar to Yoshi's Cookie, and considering the theme of the game, it fits pretty well.

But Ai isn't just an Ill Girl, but the Littlest Cancer Patient as well. As the game progresses, she slips closer and closer to the edge. And Yuki? It turns out he's a shinigami come to take her away if she gets to that point. Once you play enough times, Yuki takes her away and you're left with just the game without Ai to cheer you on. You'll have to get 50,000 points to bring her back. Can be downloaded here.

Irisu Syndrome can be considered a Darker and Edgier Spiritual Successor, considering they're made by the same author.

A sequel of sorts, Ai to Yuuki to Kashiwa Mochi Kai (Love, Courage, and Leaf-Wrapped Rice Cakes: Unexpected Meeting) was later released at a convention, with its gameplay and storyline, if you take the most obvious interpretation, being a crossover between Kashiwa Mochi and Irisu Syndrome. As of 2011, it can be bought here, along with some Maou Monogatari Monogatari artwork that was packaged with the convention version. More recently, the creator produced an iPhone version of the original game in both Japanese and English, which you can purchase here.

Tropes used in Ai to Yuuki to Kashiwamochi include:
Retrieved from "https://allthetropes.org/w/index.php?title=Ai_to_Yuuki_to_Kashiwamochi&oldid=1574885"
Categories: