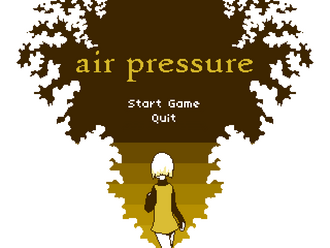 Air Pressure is a short, and decidedly unromantic, visual novel.

It focuses on the unnamed protagonist who tires of his relationship with Leigh, a girl he's been with since high school. He feels stuck and oppressed, and wonders how to bring this subject up with Leigh on his birthday.

It's short and melancholy, and will take more than two playthroughs to "get" it. (Don't worry—it's short enough, takes around five to ten minutes to play.)

The flash version is here. You can download it for Windows, Mac, or Linux here.

Tropes used in Air Pressure include:
Retrieved from "https://allthetropes.org/w/index.php?title=Air_Pressure&oldid=1630473"
Categories: