Everything About Fiction You Never Wanted to Know.
Jump to navigation Jump to search
/wiki/Akira Kurosawacreator 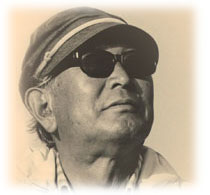 Akira Kurosawa (1910-1998) was a famous Japanese director, mainly known in the West for his samurai films, such as Seven Samurai, Ran and Yojimbo. Other notable films include Rashomon, The Hidden Fortress, Throne of Blood, Ikiru, Dersu Uzala and Sanjuro.

Born on March 23, 1910, Kurosawa is widely considered one of the best and most important directors of the 20th century, Kurosawa made films that were very influential on many American and European film directors. They include George Lucas (the Star Wars series was heavily influenced by The Hidden Fortress), John Sturges (The Magnificent Seven is a direct remake of Seven Samurai) and Sergio Leone (A Fistful of Dollars is a direct remake of Yojimbo). His "Big Four" films (Rashomon, Ikiru, Seven Samurai and Ran) are often - if not always - included in lists of the best films of all time.

Excepting Ikiru, all of his films from 1948's Drunken Angel to 1965's Red Beard featured the actor Toshiro Mifune. In 1965, the two had a falling out during the production of Red Beard and did not speak or see each other until a brief, tearful reunion in 1993. There were rumors that they would have collaborated on Kurosawa's next film after his upcoming project After the Rain, but they both died within a year of each other, with Kurosawa dying before After The Rain began filming. After 1965, there were only a few times where one spoke ill of the other, but otherwise they thought of each other - and their films together - with high regard.

The other actor most identified with Kurosawa is Takashi Shimura. Shimura appeared in Kurosawa's first film, 1943's Sanshiro Sugata and appeared in every one of Kurosawa's films from Sanshiro Sugata to 1965's Red Beard except for The Lower Depths. Unlike Mifune, however, Kurosawa and Shimura never had a falling out and remained friends until Shimura's death in 1982. Kurosawa wrote a small role for his friend in 1980's Kagemusha, which was cut from the Western release of the film (but has since been added back on the Criterion Collection DVD).

Works created by Akira Kurosawa include:
Retrieved from "https://allthetropes.org/w/index.php?title=Akira_Kurosawa&oldid=1956485"
Categories:
Cookies help us deliver our services. By using our services, you agree to our use of cookies.