Everything About Fiction You Never Wanted to Know.
Jump to navigation Jump to search
/wiki/Akira Toriyamacreator 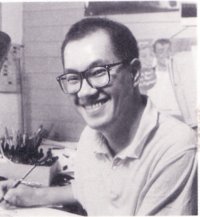 Akira Toriyama is one of the most famous manga-ka out there, and also does work on character designs in video games.

He started off in 1979 with the story Wonder Island published by Shonen Jump and gained popularity in Japan for his Breakthrough Hit gag manga Doctor Slump, but became world-famous for his Dragon Ball series. Ironically, it was meant to only be about two volumes, but we know how that ended up.

Around the same time as his Dragon Ball series was taking off in Japan, Yuji Horii approached him to work on Toriyama's most influential and famous work, the character designs and art for Dragon Quest, the game that would introduce computerized role playing games to the mainsteram Japanese market and set the standard for all console RPGs to follow. He has continued to do every single piece of artwork, monster and character design alongside the same 3 person team (Yuji Horii (story) and Koichi Sugiyama (music) ) for every single Dragon Quest game since then, including each and every spinoff.

On the comics side of things, after Dragonball he went on to do Sand Land, Neko Majin Z and Kajika, as well as several one shots -- although he has not put out an omnibus style tankoubon since Neko Majin Z in 2005. With his rather infamous trouble with producers and his income from the Dragon Quest series, it is unlikely that he will ever do another manga series similar to Dragonball, almost all of his recent works have been short one shots.

Toriyama is known largely for his art style; while Toriyama suffers heavily from being able to draw Only Six Faces, his artwork is very stylized, and thus is hard to imitate without lots of careful study and practice.

Notably, a lot of the Mangaka that first started in The Nineties were inspired by him, including Yoshihiro Togashi (Yu Yu Hakusho, Hunter X Hunter, Level E), Masashi Kishimoto (Naruto), Hiro Mashima (Fairy Tail), and even Eiichiro Oda (One Piece). In fact, Akira Toriyama and Eiichiro Oda worked together on a Manga in 2006 called Cross Epoch, a crossover that contains Dragon Ball and One Piece characters. Considering that some of these Mangaka have already started to inspire others to join the Shonen industry, you could call him the God of Shonen manga[1]

Akira Toriyama provides examples of the following tropes:
Retrieved from "https://allthetropes.org/w/index.php?title=Akira_Toriyama&oldid=1627030"
Categories:
Cookies help us deliver our services. By using our services, you agree to our use of cookies.