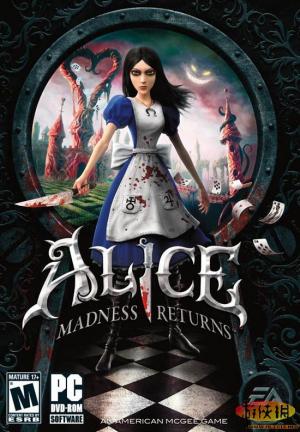 "Is it mad to pray for better hallucinations?"

Alice: Madness Returns is the sequel to the 2000 video game American McGee's Alice, and once again puts you in control of Alice Liddell, as she attempts to save Wonderland from a rampaging train and her own subconscious.

The game takes place one year after the conclusion of the original, and Alice is still struggling to recover from the emotional trauma of losing her entire family in a fatal fire. After spending a decade institutionalized in an insane asylum, she is finally released to the care of a psychiatrist, Dr. Bumby, who tries to help her conquer the nightmarish hallucinations that still haunt her. Alice embarks on a mission to root out the true cause of her family's mysterious death by returning to Wonderland, which has... taken a turn for the worse. By teaming up with old friends (and foes) and journeying through a variety of expansive locales, Alice must work through her own mind to discover the truth about the accident that killed her family... even if it makes her go insane.

The game was released in June 2011 (more than a decade after the original first came out) and was developed by the same creative team (including American McGee). The game has received mixed reviews: its pros are the unique art style, the music, and continuation of the story from the previous game, while its cons are poor level design and repetitive gameplay

Alice: "Blasted Cat. Don't try to bully me. I'm very much on edge."
Cheshire Cat: "Purrrfect. When you're not on edge, you're taking up too much space."

Little Girl: "The train is coming with its shiny cars. With comfy seats and wheels of stars. So hush my little ones have no fear. The man in the moon is the engineer."

Alice to Hatter's head: "I recall leaving you in a decrepit condition, but not in pieces."
Alice to Cheshire Cat about the Queen: "Didn't treat you too well either; lost your head as I recall."

"You're sufficiently fortified to kick some a-... Uh, to boot these creatures' nether regions."

"For starters, the Carpenter is a pusillanimous, parsimonious, pettifogging moron."