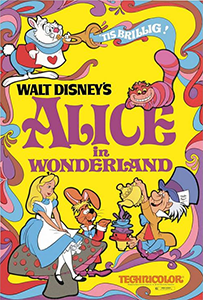 Number 13 in the Disney Animated Canon, this 1951 adaptation of Alice's Adventures in Wonderland was a long time coming at Disney, seeing as Walt Disney had a longtime interest in the Wonderland books that was reflected in some of his earlier works. They wanted to make it a decade earlier, but another production of the story was being produced elsewhere at the time, prompting the studio to shelf it for a while. Then World War II happened and they lost a lot of their budget on war films. Some Development Hell turned the what-would-be horror flick into more of a wacky, comedic cartoon in the same vein as The Emperor's New Groove, making it probably the most surreal and very odd Disney film in memory!

Alice in Wonderland performed poorly in theaters initially (it made money in re-releases), but over time it grew into one of Disney's funniest films and inspired people to this day, including Tim Burton. If you're looking for the 2010 Tim Burton film, also by Disney, visit here.

It also inspired at least two rides in the Disney Theme Parks. One is a conventional ride through the movie, while the other is the famous spinning teacups ride.

Tropes used in Alice in Wonderland (1951 film) include:
Retrieved from "https://allthetropes.org/w/index.php?title=Alice_in_Wonderland_(1951_film)&oldid=1922057"
Categories:
Cookies help us deliver our services. By using our services, you agree to our use of cookies.