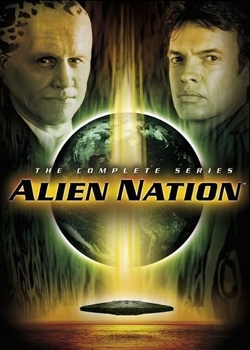 Alien Nation is a Buddy Cop Show with a Sitcom twist: the minority partner is a space alien. A human detective named Matthew Sikes is partnered with an alien immigrant named George Francisco to solve crimes arising from the uneasy relationship between the "Newcomers" and their human neighbors. The television series, based on the film Alien Nation, lasted for 22 episodes from September, 1989 to May, 1990. Five television movies were later produced, released between 1994 and 1997.

As the story goes, at some point in the early 1990s, a malfunctioning starship loaded with a population of 250,000 alien slave laborers landed in the desert outside Los Angeles. The Newcomers (their real name is the Tenctonese) were remarkably adaptable to new information and environments. They are extremely strong and can learn quickly. They become intoxicated from spoiled milk, and their flesh burns when exposed to seawater.

The Newcomers had two personal names, the one that they were given by their parents or former masters, and an "Earth name" handed out by the immigration service. With 250,000 names to distribute, some of them are quite odd. George's name was originally "Sam Francisco", but he changed it at Matt's request. Other odd Newcomer names: "Dallas Fort-Worth", "Amos N. Andy", "Polly Wannacracker", "Thomas and Alva Edison".

The situation of the Newcomers is a clear parallel to many other immigrant populations throughout history. They are isolated by their culture and language, and have to strike a balance between assimilation into Earth culture and maintaining their roots. They experience discrimination, and are forced into jobs as laborers in hostile environments. They are accused of "Takin' our Jobs!" by many blue-collar types.

Matt himself is initially very bigoted towards Newcomers, but as is typical for such a plot, he learns to accept his new partner. He even ends up in a serious relationship with a Newcomer woman, Cathy Frankel.