Alien from the Darkness 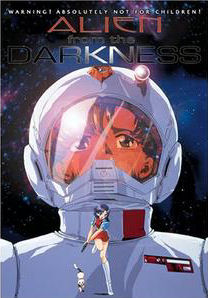 In the distant future, the all-female crew of the government-owned starship Muze receives a mysterious Distress Call while traveling through deep space. The signal originates from a derelict ship called the Zogne, which does not respond to any radio communications but otherwise shows no visible signs of damage. When a rescue party boards the vessel, they are horrified to find that the entire crew appears to be dead, with all of the women lying naked and covered in a thick, gooey substance. Before leaving, the members of the rescue party are relieved to find a single survivor...a beautiful young woman named "Flair", who is found locked in a cryo-stasis pod.

Upon returning to the Muze with their amnesiac survivor in tow, the captain orders the destruction of the Zogne, in hopes that whatever caused the demise of its crew will die with it. However, danger has returned with them, as the alluring young survivor is not what she seems... and some of those aboard the Muze have dark secrets of their own.

Tropes used in Alien from the Darkness include: