Everything About Fiction You Never Wanted to Know.
(Redirected from Alien vs. Predator)
Jump to navigation Jump to search 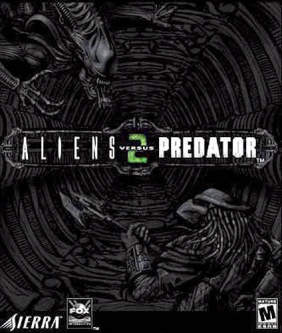 What would happen if the Predator, interstellar alien hunter extraordinaire, took it upon himself to go after the face-raping Aliens? Oddly enough, lots of humans dying.

Alien vs. Predator is the combination of Fox's two hit alien monster movies, and the stories of the innocent humans caught in the middle. The series started with Aliens vs. Predator, a comic by Dark Horse Comics, featuring colony administrator Machiko Noguchi, who finds her newly-settled world has just become a hunting ground for the Predators as they seed it with Xenomorph eggs. Dark Horse would follow on this with other comics, such as Deadliest of the Species and War, as well as crossovers with Superman, Batman, and even The Terminator. Riding the popularity wave of Predators, the Machiko story was picked up again in the mini-series Aliens vs. Predator: Three World War, in which the humans and Predators team up against a second race of Predators (similar to the "black" ones from the film) and their Alien pets.

The concept was even hinted at in the second Predator movie, which featured a Xenomorph skull amongst the Predator's trophies. It was finally made into a movie in 2004, with a sequel in 2007. The movies abandoned the previous setting and had the conflict take place on contemporary Earth. That the movies weren't exactly embraced, even by the fanbase, owes more to the fact that the movies Human protagonists were the weakest element and simply weren't credible enough while the Aliens and Predators remained both on form.

A number of games, notably a First-Person Shooter for the Atari Jaguar, two FPS for the PC, a Real Time Strategy game (Extinction) for the PlayStation 2 and XBox, and an arcade Beat'Em Up by Capcom, have also been made. The first FPS was notable for being just about the only good game on the Jaguar. The second FPS (the first on the PC) was notable for the sheer, pants-wetting terror experienced in the Marine campaign. The second PC FPS was notable for having a pretty good story, even if it did tone down the whole "terror" aspect. A third FPS (this one being Multi Platform) was released in early 2010.

The games, along with a series of comics and novels, are completely unrelated to the story or setting of the movies. They are instead set in the same time and setting as the second Alien movie.

For the films on which the game was based, see Alien vs. Predator.

Not to be confused with Alien Loves Predator.

Tropes used in Alien vs. Predator (franchise) include:
Retrieved from "https://allthetropes.org/w/index.php?title=Alien_vs._Predator_(franchise)&oldid=1912826"
Categories:
Cookies help us deliver our services. By using our services, you agree to our use of cookies.