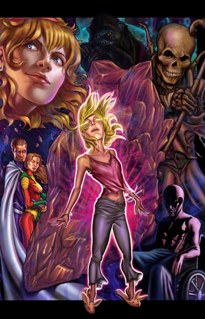 All Fall Down (2011) is a Graphic Novel created by Casey Jones and Anvit Randeria, along with half a dozen other illustrators. It tells the story of Sophie Mitchell, a teenager who accidentally steals every last superpower on Earth. Several heroes and villains die or are injured as a result of losing their powers while in use. Sophie is acquired by the government and trained to become Siphon, the world's last superhero; while the ex-heroes and villains strive to pick up their lives and move on... not all of them succeed.

The book explores Dr. Kubler-Ross's Stages of Grief, and the effects such a loss would have on superheroes.

Tropes used in All Fall Down include:
Retrieved from "https://allthetropes.org/w/index.php?title=All_Fall_Down&oldid=1773963"
Categories:
Cookies help us deliver our services. By using our services, you agree to our use of cookies.