All Gays Are Pedophiles 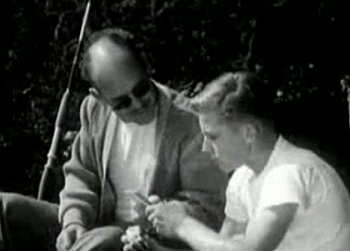 "Ralph was sick, not a visible sickness, a sickness of the mind. You see, Ralph was homosexual." (From the 1961 propaganda movie "Boys Beware")

Unfortunately not quite a Dead Horse Trope yet, the basic idea of this one is that all homosexuals (especially gay men) have a sexual interest in children and will molest them if they get a chance. This is still used as an excuse to persecute the gay community, the primary fear being that gays are trying to "recruit" children as part of the "Gay agenda" (related to Rape and Switch). Somebody Think of the Children!

You'll notice below that most examples of this trope are subversions, playing on people's prejudices only to reveal that the gays in question aren't pedophiles after all. Or the person making the claim is clearly a bigot the audience is supposed to side against from the start. Indeed, the majority of Real Life child molesters are heterosexual men, targeting children (of either sex) already known to them. Likewise, many male shotacons claim to be otherwise heterosexual.

Examples of All Gays Are Pedophiles include:

Retrieved from "https://allthetropes.org/w/index.php?title=All_Gays_Are_Pedophiles&oldid=1820812"
Categories:
Cookies help us deliver our services. By using our services, you agree to our use of cookies.