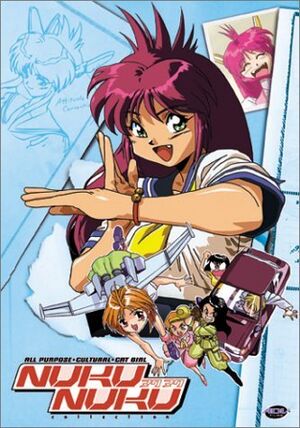 The heartwarming story of a Boy and his cat...

...and a major Military Equipment Manufacturer.

Combine a state-of-the-art combat android with the brain of a stray cat, wrap it all in the appearance of an enthusiastic teenage girl, and what do you get? Nuku-Nuku, aka Atsuko Natsume, "daughter" of engineer/roboticist/high school teacher Kyousuke Natsume and "sister" of ten-year-old Ryuunosuke Natsume. Busty, bouncy and absolutely innocent in the way a kitten is, Nuku-Nuku is also a powerful combat cyborg who is fiercely protective of her family and friends. Since her "father" is the estranged husband of the CEO of Mishima Heavy Industries, Japan's number one military contractor, and she herself is a stolen prototype he created, that means she sees a lot of action. From a pair of trigger-happy goonettes to a psychotic android that wants to steal her body to the task of trying to reunite Kyousuke and his wife so her little brother is happy, Nuku-Nuku approaches every challenge with a smile, a laugh, and a grip that can bend steel I-beams.

A light-hearted, comedic miniseries despite its darkish opening and the vast amount of firepower deployed throughout its six episodes, All Purpose Cultural Cat Girl Nuku Nuku is a fun romp with one of the more endearing anime heroines of the early 1990s. It's proven popular enough to spawn several Alternate Universe Spin Offs. The anime franchise as a whole consists of three entries: