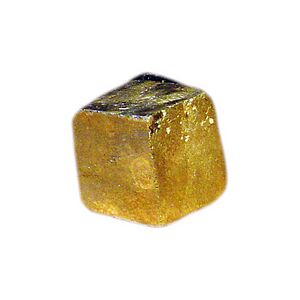 Iron pyrite, also known as Fool's Gold, is a lustrous rock that resembles polished gold, but is in fact worthless.

Real gold is a dull color, and may not look valuable at all to the untrained eye.

Not everything that looks valuable on the surface is actually valuable. A bright facade on a house can conceal a rotting foundation. Makeup can conceal age and illness. A bright smile can hide deceit and hostility. Appearances can be deceiving. Whenever a character is deceived by surface appearances into overestimating the value of something this trope is in play.

In works that wish to teach An Aesop that material wealth is not the true wealth one should strive to attain, the "glitter" may very well be real treasure of considerable monetary value, set to deceive characters into choosing them over less obvious wealth, like love, friendship, or honor.

Examples of All That Glitters include:

Retrieved from "https://allthetropes.org/w/index.php?title=All_That_Glitters&oldid=1859585"
Categories:
Cookies help us deliver our services. By using our services, you agree to our use of cookies.