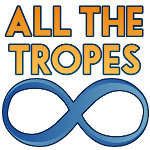 All The Tropes is this very website! To learn more about the background of this website, its rules and policies, see our "About Us" page.

However, that's not what this page is about. This website is also a creative work, so it gets its very own list of tropes! (Including trivia tropes.)

Tropes used in All The Tropes include:
Retrieved from "https://allthetropes.org/w/index.php?title=All_The_Tropes&oldid=1850601"
Categories:
Cookies help us deliver our services. By using our services, you agree to our use of cookies.