All The Tropes:New User Introduction

Welcome to All The Tropes! I'm Wally, and I'll be your tour guide today.

This page is to help you get acquainted to this the wide world of tropes. If you're coming to us from another troping website, you'll want to take the advanced tour instead.

You must be at least 13 years old in order to edit on our site, unless accompanied by a parent or guardian. Okay, strap the belt in securely, because this ride is about to get started!

For our purposes, a "trope" is simply a pattern that occurs in media, for good or ill. Sometimes things feel overused and become cliche, but are you seriously going to take your five-year-old daughter to a movie that doesn't end Happily Ever After? Tropes are simply tools for storytelling, and like a superpower, they can be used for good or evil. 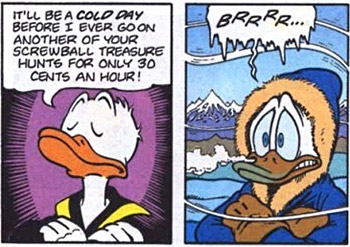 We're now entering the section of tour going through the Tropes of Legend! If you look off to your right, you can see one of the very first tropes added to the wiki, the Gilligan Cut. This trope is named after the many times that the Skipper on Gilligan's Island would vow to never buy into a harebrained scheme one minute -- followed by him enacting the hairbrained scheme in the very next scene.

While some tropes are a case of art imitating life, this is not always the case. That trope relies on the medium (television) to create the comedy -- real life doesn't cut from one scene to the next that fast. Well, not without ridiculous amounts of sedatives, and those aren't allowed on this ride. We definitely want to avoid sedatives, because we're coming up on Chekhov's Gun.

This describes a story element that is inconspicuously introduced now, but becomes extremely significant later. But that doesn't mean everything is important in a story; mysteries are full of Red Herrings.

Speaking of tropes that are the standard for the genre, consider Finagle's Law (a.k.a. Murphy's Law) is a feature of just about every Horror movie out there. And sorry folks about the delay in the tour, just hold on a minute while I get this motor restarted. Oh, good, we escaped the zombies in the nick of time, and only lost one passenger!

A lot of our tropes have funny names, and the MacGuffin is no exception. This name was popularized by Alfred Hitchcock, and describes an object that everyone in the story wants. Not that it actually matters what the object is -- it can be a Briefcase Full of Money, and Artifact of Doom, or a mysterious gift from a dying man.

Our site isn't all about traditional media, either. As we pass into our Video Games section, you can catch a glimpse of our Damsel in Distress tied to a post. (No, you don't have to slay that dragon to rescue her, she's just an actress.) Often a princess in need of saving through some magical quest, she's almost always attractive, but is completely unable of saving herself.

But this leads us to an important point: the social message of tropes isn't always a good one. In modern society, we want women to be the equals of men, and not to be helpless. Yet extreme examples of Damsels in Distress still persist, often relics of a bygone era. This leads to what we call Values Dissonance: where morals and mores from different times and cultures clash and make you, the viewer, cringe a little bit inside.

If you have an opinion on a trope, don't be afraid to share it. We're not about long-form blogging here, but snarky fan commentary is definitely our oeuvre.

In addition to having pages about tropes here, we also have pages about works -- particular things in the media like Television shows, Web Comics, Films, Anime, and more. This wiki is a great place to talk about the entertainment that fits your life, and the tropes and plot from which they are constructed.

Because stories are more than just a way to pass time -- they create our culture. David Morgan-Mar of Irregular Webcomic suggests that Star Wars may be the world's most well-known fictional work, and the first one to be known by a majority of the world. The Wizard of Oz occupies a similar place in our global imagination. Even The Bible is full of tropes, and it has influenced the style and substance of countless other works.

And finally, we talk about creators. Creators of cool stuff, like Joss Whedon. There are a lot of Buffy fans around here. Creators are real people, so we need to remain nice on their pages. Feel free to criticize the book all you want, but try to remain civil with actual people. As they say, hate tha game, not tha playa.

And thus ends our guided tour of All The Tropes. Please put your tray table up and chair in the fully upright position before exiting the ride.

From here, there are lots of places you might want to go. The first is the search box at the top of the page. Just type in the name of your favorite book or movie, and then click on its name. From there, you can just start exploring on your own, Wiki Walking though any pages that sound interesting.

On getting started with editing:

To link to another page in the wiki, use double square brackets around the name, like: [[Page Name]]. If you want to display alternate text in the link, put a pipe character "|" after the name, like so: [[Page Name|my link to a wiki page]]. Lines starting with an asterisk "*" make new bullet points.

If you need to mark an "spoiler" -- like the ending of the show or a major plot twist so that you have to select it to see it, put it in a spoiler template, like: At the end of ''[[Citizen Kane]]'', we find out that {{spoiler| Rosebud is the name of his sled}}.[1]

To create new pages, look for a drop down menu on the edit view of the page you are about to make (under the words "select boilerplate" and select the appropriate page layout and click "Load". This will put down the page tags and templates you'll need so you can just focus on adding content.

Those few things will deal with about 80% of the markup on the wiki -- check out Help:Editing for more when you need to know it.

As a result of the Great Miraheze Spam Flood that affected multiple wikis starting in December 2020, we have instituted moderation of posts. Your edits and image uploads will not appear immediately, the way that they would on Wikipedia.

A small number of people are exempt from this anti-spam measure. This is a privilege given to them for consistently good edits and being a Troper in good standing, not a right - it has to be earned, and it can be removed if the Troper decides to go rogue or starts ignoring the Style Guide or other wiki policies and guidelines.

Retrieved from "https://allthetropes.org/w/index.php?title=All_The_Tropes:New_User_Introduction&oldid=1860349"
Category:
Cookies help us deliver our services. By using our services, you agree to our use of cookies.