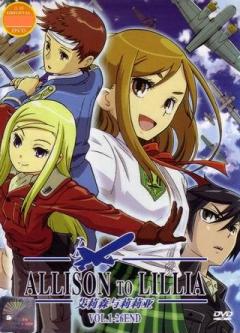 A 26-episode, 2008 anime adapted from two related Light Novel series by the same author-illustrator team behind Kino's Journey. The series is set on an alternate world of roughly 1930s-era technology, with one big continent split down the middle by a huge river. As a result, two distinct cultures developed in the East and West, neither of which can seem to get along with the other: there have been countless wars in the past, and the west's Allied Kingdoms of Bezel-Iltoa and the east's Roxcheanuk Confederation are technically only in the middle of an armistice, albeit the longest one to date. (It's not as grim as it sounds; the two warring sides are able to hold at least one joint military exercise during the armistice.) The origination of the war is that both sides believe their ancestors to be the true ancestors to humanity; apparently, neither one has heard of river valley civilizations. By the "World Calendar" shared by both sides, they are in their 3287th year of recorded history.

The story revolves around Teen Genius / Ordinary High School Student Wilhelm "Wil" Schultz and Genki Girl / Ace Pilot Allison Whittington, two orphaned childhood friends who unwittingly stumble onto a tale of a treasure that could end the war. Complicating matters throughout are Allison's growing feelings for Wil, which, despite his perfect memory and keen observation skills, he completely fails to notice. (It doesn't help that she just can't seem to confess due to the plot continually interrupting her.) Over the course of their travels, they first encounter Carr Benedict, an overly-amorous officer of the Sou Beil Air Force, and Fiona, a young woman in a mountain village who harbors a great secret. After three major adventures spanning a single year, the story flashes forward to introduce Lillia, Allison and Wil's daughter, and her own adventures with her friend Treize, Benedict and Fiona's son. The adventures the pair stumble into revolve around the consequences of decisions made at the end of the war fifteen years earlier, as well as Treize's inner struggle between the need to protect his true identity and the desire to reveal his feelings to Lillia.

A straight-up Adventure with Action and Mystery elements, it avoids (for the most part) the frequent Mind Screwery of the aforementioned Kino's Journey. It is also features continuing plots, rather than the standalone, episodic nature of Kino. This is a blessing and a curse, with the upshot that the producers of the anime were faced with the unenviable task of cramming 10 books into a single 26-episode series. As a result, the anime dispenses with Sigsawa's flowery descriptions of the landscapes and obsessive technical profiling of every new bit of technology that crops up, while toning down the violence, leaving out important bits of plot and characterization, and pushing Suspension of Disbelief to the breaking point. Nevertheless, the series retains a certain charm that makes it hard to resist, with an opening theme that sets the tone perfectly. (See here.)

Oh -- did I mention there were planes?

Tropes used in Allison & Lillia include:
Retrieved from "https://allthetropes.org/w/index.php?title=Allison_%26_Lillia&oldid=1767737"
Categories: