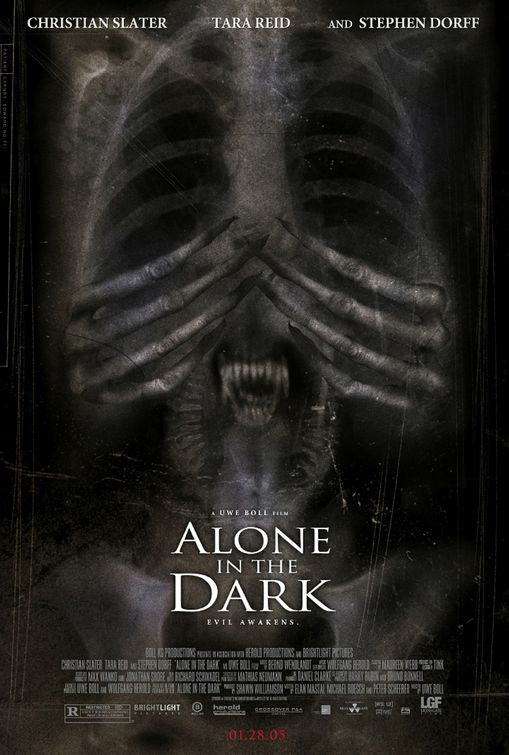 Be afraid...be very afraid (but not for reasons you might expect).

Alone in the Dark, released in 2005 and directed by Uwe Boll, is a very, very loose adaptation of the franchise that popularized and kick-started the Survival Horror genre of video games. The film uses a few character names and basic plot elements from 2001's Alone in the Dark: The New Nightmare, but this is where the similarities between the two continuities end.

The film begins with an extended opening text crawl (narrated!) that tries to shed some light on the story, which involves an ancient race called the Abkani, an experiment by a Mad Scientist named Lionel Hudgens, and an orphanage from which he took many of his test subjects. One of these orphans, paranormal investigator Edward Carnby, is called upon to investigate the remnants of the Abkani, hoping to find out how that's connected to his past (since he can't remember it at all).

What follows is a disjointed and Plot Hole-laden chain of events that brings Edward back to his old girlfriend, Aline Cedrac (who, in the original games, was not romantically linked to him). Eventually, the two of them run into members of Bureau 713 (of which Edward is coincidentally a former member), fight off hordes of aliens, and engage Hudgens in a final showdown.

Much like Boll's previous film adaptation of House of the Dead, Alone in the Dark was met with a tremendously negative reaction both from filmgoers and movie critics. There is very little connection to the games the movie is purported to be based on, and the film itself is full of bad special effects, mediocre acting, plot holes, and lots of Padding to attempt to cover up the plot holes.

The Agony Booth has taken a critical look at it, as did The Nostalgia Critic (with help from Linkara and Spoony, since TNC was so traumatized from watching the film alone that he had a stroke).

Despite the movie's critical and commercial failure, a direct-to-video sequel entitled Alone in the Dark II was released in 2008. Uwe Boll produced, but did not direct, the second movie (the actual directors, Peter Scheerer and Michael Roesch, were also the directors for the House of the Dead sequel).

Tropes used in Alone in the Dark (2005 film) include:
Retrieved from "https://allthetropes.org/w/index.php?title=Alone_in_the_Dark_(2005_film)&oldid=1711151"
Categories:
Cookies help us deliver our services. By using our services, you agree to our use of cookies.