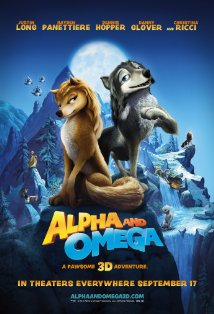 A computer-animated movie released by Lionsgate, in Fall 2010.

Alpha And Omega focuses on two wolves on opposite ends of their pack's social order. Kate is an Alpha, who takes her job seriously, and Humphrey is an Omega, who spends his days joking around with his friends. Kate is to be married to Garth, an Alpha wolf from another pack - not for love, but to preserve peace. However, the marriage is put on hold when Kate and Humphrey are sedated and taken a thousand miles away from home, to... repopulate. They must work together to get back home, but falling in love with each other complicates everything. To make matters worse, it's a race against time - back home, conflict is brewing among rival packs...

Tropes used in Alpha and Omega (film) include:

Humphrey: (Upon seeing the slobber on his face and a very pissed-off bear) "Oh, poo..."

Humphrey: "Two bears are eating a clown and one of them asks 'Does it taste funny to you?'"
Humphrey: "A simple boo would have sufficed."

Eve: "If any of you wolves have hurt my daughter, I will personally RIP out your eyes, and SHOVE them down your throat so you can see my claws TEAR YOUR CARCASS OPEN! "