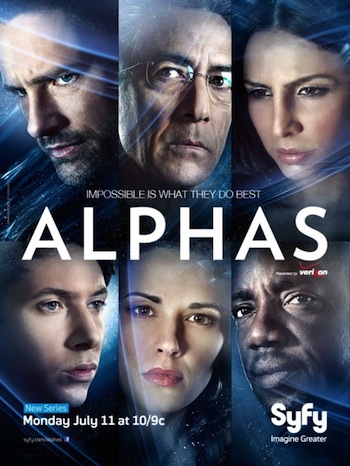 The Alphas and Rosen.[1]

A Syfy series that premiered in Summer 2011 about a secret government team of people from various walks of life who have superhuman abilities and fight crime.

The series opens when a witness is shot and killed in a locked courthouse interrogation room with no shooter in sight. On the case is Dr. Lee Rosen and his team of Alphas, people with superhuman abilities: Gary Bell, a young man with autism who can see WiFi and cellphone signals with his mind; Bill Harken, an ex-FBI agent who can temporarily use Super Strength; Nina Theroux, who can control other people's minds; and Rachel Pirzad, who can use one sense at heightened intensity while disabling the others. They find that the shooter behind the murder is Cameron Hicks, an ex-Marine marksman with impeccable aim, having managed to shoot the witness through an air duct. It turns out that Cameron is an Alpha, but that the whole ordeal was orchestrated by an Alpha called the Ghost, who mind-controlled Cameron and is part of something much bigger than they'd imagined.

Alphas is part of the "Syfy-verse": it exists in the same fictional universe as Eureka and Warehouse 13.

Tropes used in Alphas include: