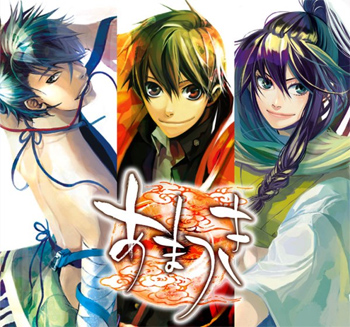 Tokidoki Rikugou is an Ordinary High School Student who, after failing history class, is forced to visit an incredibly high-tech virtual reality museum modelling the Edo Period with some of his classmates, including notorious class-cutting delinquent, Kon Shinonome. As he explores the building, Toki comes face-to-face with a masked figure whose monstrous companion, the Nue, inexplicably attacks him, destroying his VR goggles and leaving him blind in one eye. But then a beautiful young swordswoman named Kuchiha shows up just in time to save the day, before Toki drops off into unconsciousness.

He later wakes up in a room with none other than Kon, although the latter appears very different than before. Kon and Kuchiha explain to Toki that the masked figure is a demon known as Yakou, that he is now trapped in the simulation of Edo Period Japan, and that Kon was also attacked and transported there two years earlier - despite the fact that Toki recalls having last seen him only ten minutes ago. There is no known way to return home, so the pair of them elect to take care of Toki and teach him how to fit in.

This all plays out like a fairly typical Trapped in Another World story, until Toki eventually discovers that he has a special power. In this world called Amatsuki, where everyone's destiny is pre-determined by the reigning Powers That Be , Toki is unique in that, as a newcomer to the world, he is the only one whose destiny has not already been decided - thus giving him the power to change the fates of others through his actions and decisions. His status grants him the title of "The Unwritten Page", and as a war between humans and demons rages on in Amatsuki, both sides want to use his power to their own advantage. This soon leads him to encounters with members of the different factions, including Bonten, a powerful demon and agent of Heaven; Ginshu, a priestess who is head of demon extermination; and Tadajiro Sasaki, a manipulative government official.

While it's often passed up or overlooked for its extremely complicated and often confusing storyline, Amatsuki, a manga by Shinobu Takayama, has a very strong story with Awesome Art, an intricate plot, accurate and detailed references to Japanese history and folklore, and a fleshed-out cast of characters.

Tropes used in Amatsuki include: