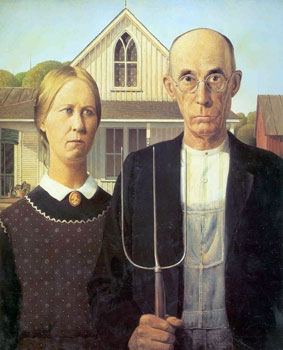 "Stop staring at them, Pa. You're making me downright jittery."

A subtrope of Art Imitates Art.

American Gothic. No, not the show, the 1930 Grant Wood painting with the dour, Alan Greenspan-esque man with a pitchfork and his equally dour daughter (often mistakenly assumed to be his wife). It is actually a portrait of Grant Wood's sister and his dentist. The house in the painting still stands today. Along with Leonardo's Mona Lisa and Edvard Munch's The Scream, it's one of the most parodied, imitated and referenced paintings in media, both real and fictional (there's even a blog devoted to collecting these parodies).

Incidentally, the "Gothic" refers to the architectural style of the window behind the couple.

A gigantic compendium of parody images can be found here.

Examples of American Gothic Couple include: