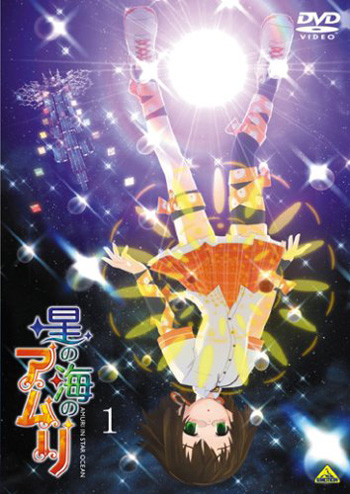 Amuri in Star Ocean (星の海のアムリ, Hoshi no Umi no Amuri) is a three-part CGI animated OVA released in 2008 by Studio Hibari, written and directed by Yoshitomo Yonetani (Betterman, Brigadoon Marin and Melan, GaoGaiGar) with music by Mina Kubota (Kannazuki no Miko, Kyoshiro to Towa no Sora, Kaleido Star).

The story is set in Year 019 of the New Age, a future era in which mankind has evolved into a new species called Adapters. Three Adapter girls — 13-year-old Amuri from Japan, 12-year-old Suzu from China, and 14-year-old Perrier from France — set out on a space adventure that will affect the rest of their species. Despite the Science Fiction premise and setting, the show is filled with Magical Girl Warrior elements, Moe and Les Yay fanservice, and Tastes Like Diabetes levels of cuteness. Darker and Edgier than you might expect.

Besides the title, this series has nothing to do with any of the Star Ocean video games or anime.

Tropes used in Amuri in Star Ocean include: