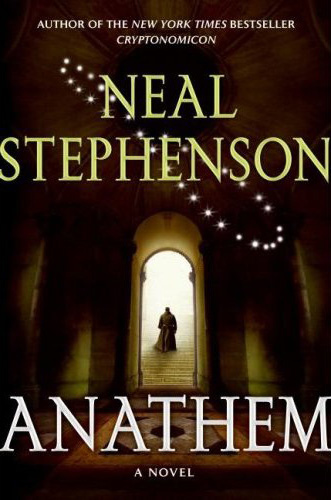 Fraa Erasmas: "Our opponent is an alien starship packed with atomic bombs. We have a protractor."

Anathem is a novel by Neal Stephenson about a world with a monastic organization which, instead of studying God, studies science, mathematics, and philosophy. Members of a mathic order, or "avout", take vows to spend either 1, 10, 100, or 1000 years in complete isolation from the outside world in monasteries called "maths". The only exceptions to this isolation come when they are called out of the maths to help the sæcular world solve some crisis, and during the "sacks", when the sæcular world assaults the mathic orders for being too powerful. Like many of Neal Stephenson's other books he Shows His Work with several appendices of Socratic dialogues and at least a cursory understanding of geometry and platonic philosophy being helpful. Like Cryptonomicon, the book isn't really about the plot; just as Cryptonomicon was really about cryptology and The Baroque Cycle was really about modern economics, Anathem is really about Platonic epistemology. Applied and weaponized Platonic epistemology.

Tropes used in Anathem include:
Retrieved from "https://allthetropes.org/w/index.php?title=Anathem&oldid=1678128"
Categories: