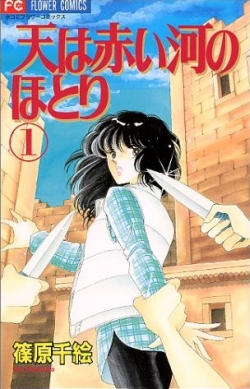 Red River (天は赤い河のほとり, Sora wa Akai Kawa no Hotori), also known as Anatolia Story, is a historical fantasy shōjo manga series by Chie Shinohara. Sadly, it is only a manga. If anyone wants to turn it into an anime, please hurry up.

The story is about a fifteen-year old Japanese girl named Yuri Suzuki, who is magically transported to Hattusa, the capital of the Hittite Empire in Anatolia. She was summoned by Queen Nakia who means to use Yuri as a human sacrifice. Yuri's blood is the key element needed in placing a curse upon the princes of the land so that they will perish, leaving Nakia's son as the sole heir to the throne. As the story progress, however, Yuri not only repeatedly manages to escape Nakia's scheming, she also becomes revered as an incarnation of the goddess Ishtar and falls in love with prince Kail.

Also, this summary is straight off of Wikipedia, so someone please change it soon and add creativity.

Compare Oke no Monshou, in which a 15-year-old American girl named Carol Reed is thrown in Ancient Egypt.

Tropes used in Anatolia Story include:
Retrieved from "https://allthetropes.org/w/index.php?title=Anatolia_Story&oldid=1729104"
Categories: