And You Thought There Is Never a Girl Online? 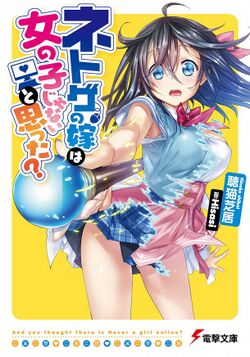 Hideki Nishimura, aka Rusian online, is a teenager that once confessed to someone he thought it was a girl inside a MMORPG called LA(Legendary Age). The girl didn't accept his confession....Because she was actually a guy, playing using a female avatar. Devastated by the incident, Hideki assumed an sceptic attitude towards anyone who plays as female in online games. Two years later, one of his companions in a guild he's part of in LA reveals about the incident to the other players. The resulting conversation ends up with the guild members deciding to meet with each other in real life.

To Hideki's surprise, Ako, a player with a female avatar that has a crush with him in-game, is....a female in real life!

Tropes used in And You Thought There Is Never a Girl Online? include:
Retrieved from "https://allthetropes.org/w/index.php?title=And_You_Thought_There_Is_Never_a_Girl_Online%3F&oldid=1813221"
Categories: