Everything About Fiction You Never Wanted to Know.
Jump to navigation Jump to search
/wiki/Andrew Rannellscreator 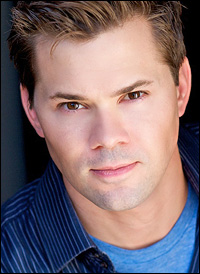 Andrew "Andy" Rannells is an American voice actor, who has worked on the properties of 4Kids! Entertainment and DiC. As of 2006, he left 4Kids Entertainment to play the role of Link Larkin in Hairspray on Broadway. He has a multi-voice talent, such as doing accents. He has also done voice acting for Harley in the Pokémon anime and portrayed James in the stage show Pokémon Live.

Rannells recently performed in the musical Jersey Boys in the First National Tour, the "Sherry Cast." Rannells plays songwriter Bob Gaudio, the youngest member of the Four Seasons. His last performance as Bob Gaudio with the Sherry tour was on December 6, 2008 in Toronto. He most recently reprised the role of Bob Gaudio in the Broadway company of Jersey Boys. He began his run January 13, 2009 replacing Sebastian Arcelus and left the show on July 12, 2009. He continues to record voice-overs for commercials and audio books.

He is currently starring in The Book of Mormon, a new musical written by Trey Parker and Matt Stone of South Park fame, and Avenue Q composer Robert Lopez. He earned a nomination for the Tony Award for Best Leading Actor in a Musical for his role in the show.