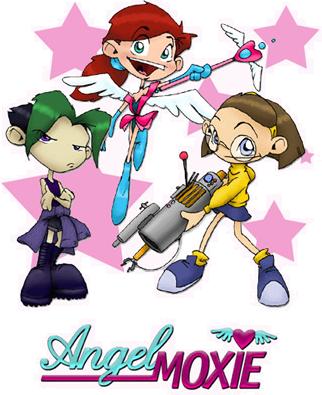 On the night before her first day of junior high, Alex O'Connor has a dream in which a mysterious entity hands her a wand and proclaims that she will save the world from evil. Alex wakes up the very next morning with the rod in her hand and not a clue of what to do with it. By the time the day is over, she's killed her first monster and gained a talking cat as a mentor. Welcome to magical girl duty, Alex.

Angel Moxie is a black and white Yonkoma Webcomic Affectionate Parody of Magical Girls by Dan Hess, creator of Rebus, Realms Of Ishikaze, and Weesh. It mixes a sharp sense of humor with a fairly cut and dried magical girl plotline. What results is an overall charming teenage superhero romp that hits some surprising emotional depths along the way.

The series ran from 2002 to 2006. Upon completion of the storyline, the series began rerunning with a new strip from the archives, though no new material has been written since.

You can read the archives here.

Tropes used in Angel Moxie include:
Retrieved from "https://allthetropes.org/w/index.php?title=Angel_Moxie&oldid=1912586"
Categories:
Cookies help us deliver our services. By using our services, you agree to our use of cookies.