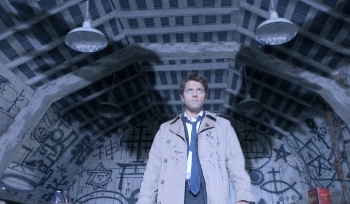 The shadow gives it away.

A character or entity that is implied to be, but never explicitly described or defined as, an angelic being or divine messenger. Sometimes revealed as such in the end of the story, but not always, leaving open the question of Maybe Magic, Maybe Mundane. All in all, a good reason to be nice to your guests, and Beware the Nice Ones. If the characters Gave Up Too Soon, only the audience will know.

Often used to underscore the importance of Sacred Hospitality, as in the Trope Naming page quote.

See also God Was My Co-Pilot, where the supernatural aspect is revealed after a long period of appearing normal.

Examples of Angel Unaware include: