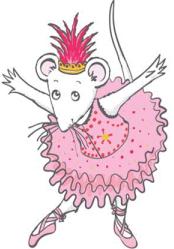 Angelina Ballerina is an Animated Series produced by HiT Entertainment, based on books by Catherine Hollabird and Helen Craig. First airing in 2002, the series is a Slice of Life type program. It features the misadventures of a mouse named Angelina Mouseling and her friends.

In 2009, the series was given an All CGI Cartoon makeover and subtitled "The Next Steps" as Angelina goes to attend dancing school. Angelina herself received a makeover in this version of the show: She's now light pink in color. In the original series and books, she was white.

Tropes used in Angelina Ballerina include:
Retrieved from "https://allthetropes.org/w/index.php?title=Angelina_Ballerina&oldid=1832693"
Categories: