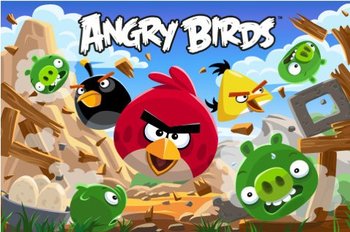 Ah, the pleasures of revenge.

Angry Birds is an artillery Puzzle Game. The premise of the game is that some evil, egg-munching pigs (officially named "Bad Piggies") have raided the nests of some birds who mean to get their eggs back, whatever it takes. Said egg retrieving involves launching the birds from a slingshot at the pigs, who are protected behind elaborate obstacles of wood, ice, and stone. It's a simple concept, but the execution is often anything but easy.

There are several different types of birds, most of which have a special ability activated by tapping the screen in mid-flight:

The Puzzle Game aspect (and the game's main source of difficulty) revolves around the best use of the available birds in each level to collapse the obstacles onto the pigs, as all the pigs have to be taken out to win a level. Scoring per level is based on pigs killed[1], damage done to the obstacles, and the number of birds left over at the end of the level[2], with 1 to 3 stars awarded upon completion based on all of the scoring factors as well as points. In some levels, it's more important to finish using as few birds as possible; in others, it's a matter of causing as much destruction as you can. Achievements can also be earned for finishing episodes, three-starring all levels in an episode, scoring a certain number of points in an episode, and other things. Each episode also includes a number of hidden Golden Eggs which, when found, open bonus levels.

Originally released for smart phones[3], the game is now available for play on tablet computers, e-readers, the Google Chrome web browser, as a Playstation Minis app [4], and on Facebook. As of November 2011, Angry Birds, in all its incarnations, across all platforms, has been downloaded 500 million times. The only game with distribution figures that come close to this mark is Tetris[5] It's even been parodied on an Israeli sketch comedy show, which used the endless conflict between the birds and the pigs as a metaphor for the Arab Israeli Conflict.

An animated film based on the franchise was released in 2016.

Tropes used in Angry Birds include:
Retrieved from "https://allthetropes.org/w/index.php?title=Angry_Birds&oldid=1914957"
Categories:
Cookies help us deliver our services. By using our services, you agree to our use of cookies.