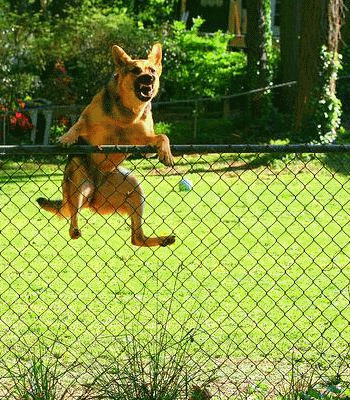 You ain't getting that ball back anytime soon.

Going into your neighbor's yard is a death wish. The milkman, the mailman, even the kid who lost his Frisbee disc doesn't want to go in there, because that neighbor has an Angry Guard Dog.

Most of the bigger breeds of dog have been used for security jobs, especially Dobermans, Rottweilers, German Shepherds, and Bulldogs. You also have different types of dogs that are supposed to guard whatever, such as a watchdog (who is simply required to bark, so a Chihuahua would do), a guard dog (who merely has to look imposing, like a Mastiff) and an attack dog (who has to be athletic and very trainable). Your stereotypical Angry Guard Dog, on the other hand, is all three. It looks intimidating, and if you enter its territory it will bark, but only if it can't maul you first (and on the way to the mauling). This dog's bite is every bit as bad as its bark.

Ironically, few Angry Guard Dogs are pit bulls. This has less to do with emulating realism and dodging current stereotypes than with indicating the old age of this trope. Bull terriers were highly regarded during the World War II era, and considering current media trends, no one wants to really highlight them in an opinionated way. And strangely enough, while bulldogs tend to be used in media for this trope, they tend to be one of the worst suited breeds for guard dogs in real life, due to their amiable disposition and poor athletic ability.

Nowadays, the trope is mostly found in cartoons. They occasionally subvert it, showing the dog is a big softie and/or coward if confronted, with the Aesop that a bully's bark is always worse than his bite.

Contrast Big Friendly Dog (though they might overlap if its friend is the person its guarding), They Have the Scent. Neutralized by Scare the Dog. Sometimes named Fluffy.

Examples of Angry Guard Dog include:

Retrieved from "https://allthetropes.org/w/index.php?title=Angry_Guard_Dog&oldid=1821227"
Categories:
Cookies help us deliver our services. By using our services, you agree to our use of cookies.