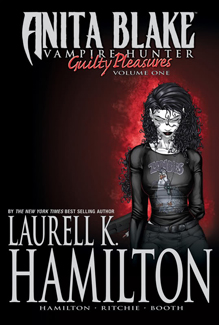 Once upon a time, there was a necromancer/animator/vampire executioner living in The Unmasqued World. She was a Chaste Hero who moved among the various vampires, werewolves, fairies, other were-animals, etc. in her world, solving crimes and kicking ass. Though she repeatedly said "I don't date vampires, I kill them" (well, vampires who are getting up to terribly bad things, anyway), she ended up blackmailed into dating one, as well as a werewolf, leading to an infamous Love Triangle. First she slept with one. Then the other. Then she took some time off to think about things.

Then came the novel Narcissus in Chains, which turned Anita a living member of Belle Morte's line. Books after this one usually require Anita to sleep with her male harem. This has led to a Broken Base, is considered Jumping the Shark, Hatedom, etc., etc.

For most of the books, the basic storyline is as follows:

Anita is at her "day job" and meets up with a shady, suspicious character that she suspects is up to no good, who tries to hire her for something. Her unscrupulous, proudly 'grey hat' boss coerces her into taking the case, while Anita threatens him and the client with either quitting or doing them grievous bodily injury. Anita speaks with her various love interests. Anita is called to a crime scene by the RPIT squad (or other law enforcement, if she's traveling) for some gruesome crime scene that will turn out to be relevant to her own case later on. At some point, she'll need to raise a zombie for something; this may involve using her own blood as a sacrifice in replacement of her preferred (chicken), but will almost always involve Anita graphically cutting herself. The plot goes on for a while longer before Anita finds out that the person who hired her in the beginning is the real Big Bad. She kills a bunch of vampires/monsters/people, overdoes her new magical ability, and wakes up in the hospital. In the later books, expect sex to be included every few pages, as Anita essentially becomes a succubus.

The spoiler tags below are sporadic. Be warned.

As Merry Gentry now has its own page, please put applicable tropes there.

Tropes used in Anita Blake include:
Retrieved from "https://allthetropes.org/w/index.php?title=Anita_Blake&oldid=1912532"
Categories:
Cookies help us deliver our services. By using our services, you agree to our use of cookies.