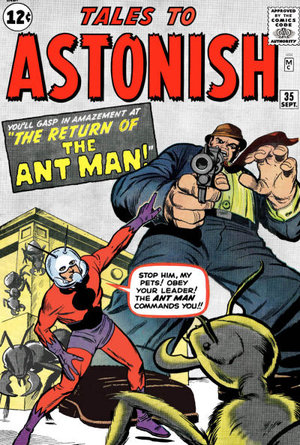 Ant-Man is the codename of three characters in the Marvel Universe: Hank Pym, Scott Lang, and Eric O'Grady.

The original Ant-Man, Dr. Henry "Hank" Pym was created by Stan Lee, Larry Lieber, and Jack Kirby. Making his Silver Age debut in Tales to Astonish #27 (January, 1962), Hank Pym was an ordinary, but brilliant biochemist. Happily married to Maria Trovaya, a political refugee, Hank was devastated when she was murdered on a trip to Hungary. Her death led to Hank's first mental breakdown, one of his defining attributes in later years. After recovering, Hank threw himself into his work, leading to the creation of a rare group of subatomic particles. Pym then uses the particles to create two serums: one that shrinks objects and one that makes them larger. Testing the first serum on himself, Pym shrinks to insect size for the first time but is unable to reverse the procedure. Now trapped in a nearby anthill, Pym nearly drowns in honey before being rescued by a friendly ant. The new friends fend off an attack by other ants looking for an easy meal before Pym makes it back to his lab. Using the second serum to return to normal size, Pym recognizes the danger of his discovery and decides to destroy the serums before they can do more harm.

Realizing that he was destroying a breakthrough, Hank recreated his serums a few weeks later. Inspired by his experience in the anthill, Pym uses the shrinking serum to become the superhero Ant-Man in Tales to Astonish #35 (September, 1962). He would pick up a partner a few issues later in the form of Janet van Dyne, a young socialite who closely resembled his dead wife. With her father dead thanks to the arrival of the creature from Kosmos, Janet volunteers to undergo genetic alteration at the hands of Pym to become "The Wasp". Together, the heroes defeat the Kosmosian and become partners. Later, the duo would join Iron Man and Thor in battle against the Hulk until the heroes realize that they've been manipulated by Loki, the God of Mischief. Banding together, the heroes defeat Loki and officially become The Avengers.

The second Ant-Man, Scott Lang was created by David Michelinie and John Byrne. Lang first appeared in Avengers #181 (March, 1979). He assumed the Ant-Man identity Marvel Premiere #47 (April, 1979). An electronics expert on the brink of poverty, Scott Lang turned to crime to support his family. A poor criminal, Lang is arrested during a botched robbery and sent to prison. Studying electronics in his free time, Lang earns himself a job offer from Stark International after being paroled early for good behavior.

Resuming his work in the field of electronics, Lang's life appears to be on the upswing until his daughter, Cassie, is diagnosed with a congenital heart condition. The only person capable of curing her condition was Dr. Erica Sondheim, but she was being held prisoner at Cross Technological Enterprises (CTE). Desperate, Lang breaks into Hank Pym's home and steals some of Ant-Man's equipment so he can confront the villain Darren Cross, the owner of CTE. Engaging the villain as "Ant-Man", Lang successfully uses his new powers to defeat Cross and rescue Dr. Sondheim.

Prepared to return to prison for theft, Lang is shocked when Hank Pym allows him to keep the stolen Ant-Man equipment. Recognizing Lang's true nature, Pym's only condition was that Scott must use the Ant-Man persona to uphold the law. Relieved, Scott receives more good news from Dr. Sondheim: Cassie's heart condition was successfully cured.

The third Ant-Man, Eric O'Grady was created by Robert Kurkman and Phil Hester. He first appeared in The Irredeemable Ant-Man #1 (September, 2006). Introduced as a low-level S.H.I.E.L.D. agent assigned to the Helicarrier, Eric O'Grady was the kind of guy who'd lie, cheat, and steal his way through life. Fortune struck one day when O'Grady and his best friend, Chris McCarthy, are put on guard duty outside Dr. Hank Pym's lab after Wolverine's dead body is brought aboard. Brainwashed by HYDRA, Wolverine is revived and starts killing everyone in sight. Panicking, O'Grady knocks Dr. Pym unconscious when the alarms start blaring. Messing around with the prototype Ant-Man suit in Hank's lab, Chris becomes trapped at insect size, causing O'Grady to panic again as HYDRA launches a full-scale attack on the helicarrier. Lost in the Helicarrier, Chris returns to full size only to be shot in the head. Looking for a place to hide, O'Grady stumbles across Chris's dead body and steals the Ant-Man suit. The Helicarrier sustains heavy damage during the attack, eventually crash landing in Arkansas. Surviving the crash, O'Grady retains his job as S.H.I.E.L.D agent during the day while experimenting with the Ant-Man suit at night.

Tropes used in Ant-Man include:

Tropes common to all versions of Ant-Man:

]
Retrieved from "https://allthetropes.org/w/index.php?title=Ant-Man&oldid=1912499"
Categories:
Cookies help us deliver our services. By using our services, you agree to our use of cookies.