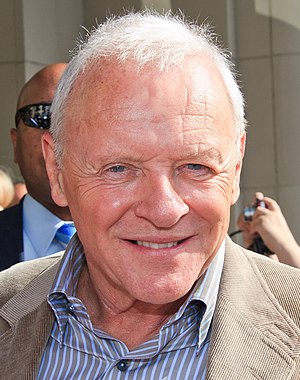 Sir Anthony Hopkins (born 1937) is a Welsh actor who is best known for playing Hannibal Lecter, for which he won an Oscar, but has had a long and illustrious career most often playing refined characters with a touch of mischief. Generally considered one of the world's best actors. Has played Titus Andronicus, John Quincy Adams, William Bligh Richard Nixon, Pablo Picasso and Hitler. Almost every film he's in is good, and in some cases, it's just because he's in it. He is also known for his deep, smooth voice.

Hopkins is sometimes considered a Classically-Trained Extra, but he's really closer to an inversion. Once touted as the Next Big Shakespearean Actor, he deliberately chose to come to Hollywood to make loud, stupid movies because that's what he likes to do. In his own words, "I have no interest in Shakespeare and all that British nonsense... I just wanted to get famous and all the rest is hogwash". He has also admitted that what drives his choice in roles is nothing but cold, hard cash.

Though one suspects that he also genuinely enjoys the roles he plays, no matter how ridiculous they are. Pay him his money, and he will show up and act. And your movie will be remembered forever for it.

Despite being known for playing one of Cinema's most famous monsters, Hopkins is known as a very sweet and friendly man who likes to be called Tony.

Anthony Hopkins has performed in the following roles:
Retrieved from "https://allthetropes.org/w/index.php?title=Anthony_Hopkins&oldid=1950573"
Categories:
Cookies help us deliver our services. By using our services, you agree to our use of cookies.