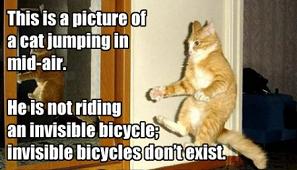 Anti-Humor is the practice of removing the expected punchline or joke from a familiar humorous situation and replacing it with something non humorous and serious. The laugh is supposed to come from subverting the audience's expectation of a punchline or humorous twist. Often this is simply done by playing the normally humorous situation straight, being literal and truthful. For example, take the following, which sets up and then subverts a Bait and Switch Comparison:

Sometimes an Anti-Joke goes a step further and creates humor out of a Mood Whiplash. An example here from Jimmy Carr:

A third broader category of anti-humor is essentially a form of Surreal Humor where the punchline is completely unrelated to the set up. Not all Surreal Humor is Anti-Humor and not all Anti-Humor is Surreal Humor. Humor can be surreal while still following a formula or having a humorous internal consistency.

A Super-Trope is meta-humor, like the joke found in this Irregular Web Comic.

Obviously these work best when the audience is thoroughly familiar with the standard version of the joke/humorous situation or the formula the joke/humorous situation normally follows, though this is not always necessary. Any situation where the audience is expecting humor or something light-hearted and gets something straight, dry, and/or darker in tone instead can potentially work. Formats where a humorous twist is always expected, such as in stand-up, cartoons, sitcoms, and sketch comedy, have more latitude for this sort of humor.

Anti-Humor is about intentionally avoiding a punchline. Certainly not all Anti-Humor ends up being funny, but it should be clear that the writer is trying to create humor from avoiding a punchline or humorous twist. For example, when Biff Tannen says "that's as funny as a screen door on a battleship" he's not trying for Anti-Humor, he is simply screwing up the traditional punchline.

Compare/contrast Shaggy Dog Story where the humor comes from a tediously long story being used to set up a weak punchline. Both types of humor stand traditional wisdom about humor on its head. Could be the source of humor in a Shoot the Shaggy Dog scenario. Compare Bait and Switch. Compare also The Comically Serious when it's a serious character put into a humorous context. Contrast So Unfunny It's Funny where the humor is unintentionally bad but so bad it's funny. Not to be confused with Ha Ha Only Serious.

Two polar bears are sitting in a bathtub. The first one says, "Hey, pass the soap." And the other replies, "No soap, radio!" Ha ha ha ha ha!

Retrieved from "https://allthetropes.org/w/index.php?title=Anti-Humor&oldid=1871915"
Categories:
Cookies help us deliver our services. By using our services, you agree to our use of cookies.