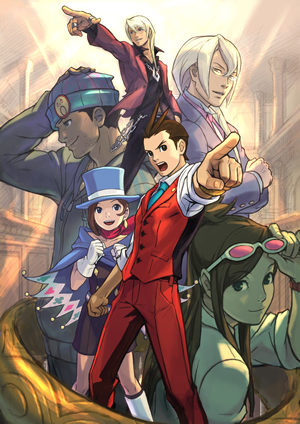 He is as loud as he looks. Also, he's reliable.

The fourth game of the Ace Attorney series, Apollo Justice: Ace Attorney shifts the focus from Phoenix Wright to Apollo Justice, a lawyer with his own quirks and an obsession with following in Phoenix's footsteps. The setting also moved ahead roughly seven years, dumping the previous cast members and introducing new ones such as Trucy Wright, Phoenix's adopted daughter and Apollo's assistant. It proved to be as critically and commercially successful as the earlier games, which are now unofficially dubbed the "Phoenix Arc" by series' fans.

Tropes used in Apollo Justice: Ace Attorney include:
Retrieved from "https://allthetropes.org/w/index.php?title=Apollo_Justice:_Ace_Attorney&oldid=1593847"
Categories:
Cookies help us deliver our services. By using our services, you agree to our use of cookies.