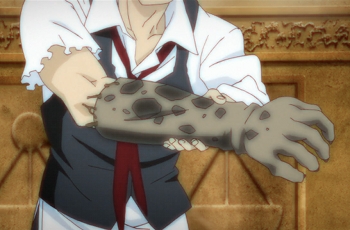 The nice thing about the Healing Factor is it's capable of bringing characters back whole From a Single Cell, even with exactly their previous hairstyle! It's usually really cool to watch too, as entire limbs grow back in gorgeous CGI (or not). Usually this is helped along with liberal use of Shapeshifter Baggage to avoid that pesky "conservation of mass" physics insists is accurate. However, sometimes physics teams up with Horror and Squick and puts its foot down on these shenanigans... or rather, puts its foot 'on'.

A character who has Appendage Assimilation can regenerate from just about any wound but with one caveat: he has to attach a working limb to that stump or consume an equal amount of bio-mass for the Healing Factor to work. So you'll have this character get torn and rent to pieces, then pull themselves together and keep fighting (and/or bantering) as if nothing had happened. Usually they never die to blood loss (which makes sense, as presumably the same power on a smaller scale works to keep their blood in their veins), and any lost limbs (head included) will still function and be reattachable, if not autonomous and capable of fighting.

The root of this power varies, it may be because as The Virus, they can "assimilate" any and all organic matter into themselves regardless of compatibility (so he might improvise by attaching snakes to his arm stump). Or they might have powerful Nanomachines that can do just about anything provided enough biomass. Magical or demonic powers of some kind are also popular.

As has been mentioned ad nauseam (pun intended), this power is not pretty to look at. Disturbingly, this can be taken even further though by having foreign limbs assimilate imperfectly. The skin won't match, the "seams" will look like burn wounds, mismatched limbs sizes are common and if the character had to make do with two left feet, well he can write off any dance competitions for a long while.The result of all this reattaching will be they look like a gooey Frankenstein's Monster, though some have enough healing factor that they can make new limbs look like they're natural... err, that is to say, natural to their body. Others might decide to forgo using human limbs and graft whatever is 'handy', eventually resulting in a Shapeshifter Mashup.

To really freak out viewers and their enemies, they might be picky about whose limb(s) they use, or even use another character's face this way. Expect them to do a bit of Showing Off the New Body just to rub it in. Compare Partial Transformation and Cannibalism Superpower.

Examples of Appendage Assimilation include: