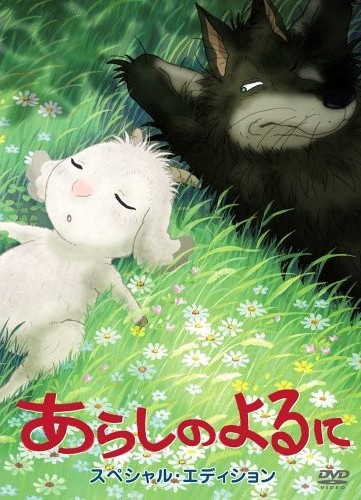 This movie has slightly more sexual tension than The Fox and the Hound (film).

Arashi no Yoru ni is a 1994 Japanese children's book and 2005 Japanese animated film about the deeply romantic friendship (or relationship, depending on whom you ask) between a goat named Mei and a wolf named Gabu.

God help you if you confuse this with Higurashi no Naku Koro ni.

There is no official English title, but when a translation is needed, fans usually call it One Stormy Night.

Tropes used in Arashi no Yoru ni include:
Retrieved from "https://allthetropes.org/w/index.php?title=Arashi_no_Yoru_ni&oldid=1828951"
Categories: