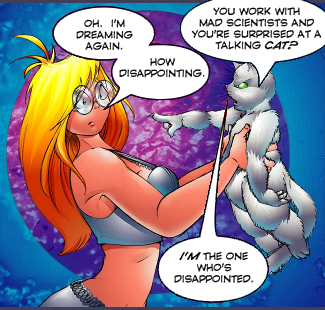 Real skepticism entails requiring evidence of good quality before believing something is true. Arbitrary Skepticism is the tendency of characters who deal with the strange and bizarre on a daily basis to dismiss anything "strange" off-hand rather than consider that, in light of everything else they've seen and experienced, a "fantastic" explanation really isn't that far-fetched.

Sometimes it makes sense—after all, just because aliens exist, it doesn't follow that something unrelated does as well - but the viewer is often left wondering how a character who has seen ghosts and vampires can feel so comfortable in immediately dismissing the possibility of, say, zombies. (If the character has a plausible explanation of why zombies can't exist, it's not Arbitrary Skepticism, since he or she obviously came to their conclusion through research and thought.)

Sometimes this is used to define the extent of the fantasy of the world: for example, letting the viewer know that in this Fantasy Kitchen Sink, there are no vampires or ghosts, even if there are unicorns. Sometimes characters will discuss this, comparing someone's cynicism about talking bats to their fighting dragons last week. Can cause Fridge Logic; if dragons are a regular and accepted occurrence in the characters' world, then why would they use it as an example to compare with something that doesn't? That would be equivalent to saying "the duck-billed platypus exists, why would you ever be skeptical of unicorns?"

The Agent Scully is fond of this.

Compare This Is Reality. A staple in Crossover Cosmologies and Fantasy Kitchen Sink humor. Effectively the aversion of All Myths Are True. See also Flat Earth Atheist, If Jesus, Then Aliens, Skepticism Failure, How Unscientific and No Such Thing as Space Jesus.

Examples of Arbitrary Skepticism include:

This was clearly meant to be a joke, since Enroth, the realm which Roland rules, sports angels. The "devils" turn to be demon-like aliens.

It's all but directly stated that he doesn't even really disbelieve, and is just pretending to to be a Jerkass and goad them into going through with it.