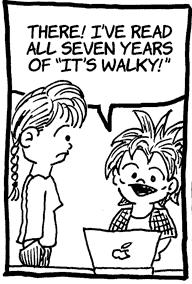 Picture the scene. You're just idly surfing the web. You find a webcomic and read the most recent one. You laugh. You decide to read the previous one. That's funny as well. You read a week's worth and laugh at all of them. You feel the urge well up inside you. It's time to go on... an Archive Binge.

The systematic read-through is a common larval stage of more-than-casual fans of a Web Comic. Such comics progress very slowly by most standards but online archives make back issue availability unparalleled. Even if reading a single installment takes seconds, a person coming across a new strip finds dozens, hundreds or even thousands of times as much new content.

So he'll sample a few... then a few more... then, if things are really working out, all of them.

The depth of the resulting addiction can be estimated from the disruption of daily life caused and from the degree of withdrawal symptoms once the reader finishes and has to follow the update schedule from then on. More sensible people time themselves and read up a little at a time. These are the people that can eat only one potato chip.

Firefox extensions like Autopager can help by automatically adding the next page as you scroll, so you don't have to click on links. For some of them, you need to be quite technically minded, though.

The site Archive Binge lets you subscribe to a web comic's archive via an RSS feed at a rate you choose, allowing you to binge at your own pace.

Archive Binge is common for first timers of this wiki, (and the other one) as xkcd has pointed out. It is also an increasingly common phenomenon with regard to TV shows, now that it is possible to buy whole seasons of a Long Runner on DVD.

It is not unusual for fans who have already been following a series to undertake several more archive binges, often initiated by an Archive Trawl. It's also good practice for Fanfic writers to undertake this, especially in a new fandom, or one they're going back to. It's often called "Canon Review" in these circumstances.

Examples of Archive Binge include:

Retrieved from "https://allthetropes.org/w/index.php?title=Archive_Binge&oldid=1918696"
Categories:
Cookies help us deliver our services. By using our services, you agree to our use of cookies.