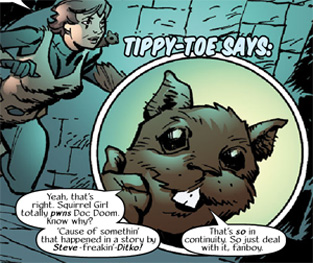 As proven by a talking fourth-wall-breaking squirrel.

Originally referenced in Running the Asylum, this trope refers to infighting within the official ranks of a shared-universe franchise, where creative teams will take potshots at each other, using their own stories to undercut, contradict, Retcon, or just plain insult the work of their rivals. Because these are official stories, each volley becomes entrenched in the overall setting.

If the shots just end up tangling the Canon up, then a Continuity Snarl can be the result. Sometimes, the mess results in a Crisis Crossover—which will inevitably become the target of later writers Armed With Canon.

Recent examples of the Crisis Crossover are active volleys of Canon-fire, as different factions within the companies have a tug-of-war over the "New Direction".

Ship-to-Ship Combat is occasionally a cause. A lesser shade is Depending on the Writer.

Messing with other authors' characters in a large Shared Universe is a potential Flame Bait and may be off-limits as impolite and sometimes prohibited outright: it's almost someone's Player Character, and in settings made for RPGT it sometimes is. Conversely, simply asking the original author before using "their" characters in canonical material is a nice and Continuity-enhancing practice. Of course, there's a precarious balance between counterproductive doting over prominent characters by their authors or derailing these characters (and royally vexing their authors) without any good reason by Executive Meddling or another author missing the whole point somewhere.

If fans are the ones doing this, it's a Fix Fic. Has nothing to do with Arm Cannons.[1]

Examples of Armed with Canon include:

Retrieved from "https://allthetropes.org/w/index.php?title=Armed_with_Canon&oldid=1879120"
Categories:
Cookies help us deliver our services. By using our services, you agree to our use of cookies.