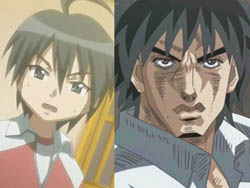 Scene in animation or print where the art suddenly and intentionally shifts into a different style, usually for homage or parody purposes. Frequently occurs during flashbacks, particularly Rashomon Style sequences. Particularly abrupt shifts can be rather scary.

Anime uses this extensively in gags where The Take is a homage to a particular famous manga artist.

Not to be confused with instances where the art unintentionally changes as a result of, for instance, the animation being subcontracted to several different studios. For this, see Off-Model. Neither should it be confused with cases where the style changes because two or more unrelated anime have been stitched together by an American distributor—for this, see Cut and Paste Translation.

Also should not be confused with Art Evolution, which is a gradual and more permanent art change over time as the artist gets the hang of drawing the series.

Can overlap with Show Within a Show, Deep-Immersion Gaming, Disneyesque and Super-Deformed.

Compare Non-Standard Character Design. Contrast with Medium Blending, where it isn't just the art style but the whole medium (animation to live-action, 2D to 3D, etc.) which changes.

See also Stylistic Suck, a phenomenon used to visually distinguish a show-within-a-show from the work that uses it.

Examples of Art Shift include:

Retrieved from "https://allthetropes.org/w/index.php?title=Art_Shift&oldid=1951737"
Categories:
Cookies help us deliver our services. By using our services, you agree to our use of cookies.