Everything About Fiction You Never Wanted to Know.
Jump to navigation Jump to search
/wiki/Art of Dyingcreator 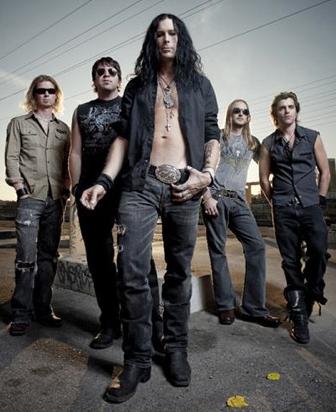 Art of Dying is a Hard Rock/Post-Grunge band from Vancouver, Canada formed in 2005. The band came together when guitarist Greg Bradley met singer Jonny Hetherington on a street corner, playing his guitar for change. Greg asked if he wanted to jam and they've been playing together ever since. They happened to meet drummer Jeff Brown through working in a nearby jam space, who got them into contact with bassist Cale Gontier and guitarist Tavis Stanley from out east. Tavis had played in Thornley for 4 years while Cale was a technician for Three Days Grace (also cousins with singer Adam).

They released their self-titled debut independently through Thorny Bleeder Records on iTunes and CD Baby in 2006 along with a few hard copies floating the Vancouver area in 2007. Thorny Bleeder later managed to get Universal Music Canada to release it in the rest of the country.

The album was successful for an independent band. The song Get Through This was used as the opening theme for the second season of the Canadian Hockey-drama/reality series Making the Cut, the theme for the 2009 WWE Survivor Series, official theme of the WWE NXT program and the band was nominated for a 2009 Canadian Radio Music Award for Best New Group. They met and befriended Shaun Morgan of Seether, recording "Die Trying" with him (though given the fame difference, some have labeled it "Shaun Morgan feat. Art of Dying"). They band would get to open for Seether, Three Days Grace and even play Download Festival.

Art of Dying as networking band if their ever was one, blogging and giving CDs to promoters and the like. At some point one of their contacts, a manager in Boston recommended their CD to Dan Donegan of Disturbed, who decided he wanted AOD to open for them on their Canadian tour dates. They would go on to play several more arena dates for the rest of the Indestructible tour.

Near the end of 2009 after a fateful phone call with Donegan, Art of Dying signed with Disturbed's Intoxication Records, becoming its first artist. The band went straight to work on their major label debut with producer Howard Benson (Flyleaf, Skillet, POD, Papa Roach, 3 Doors Down). They'd already written the majority of the new songs, so mixing was started in April of 2010.

The new album was officially named "Vices & Virtues" that May. A re-recording of "Die Trying" was released to radio stations and on iTunes by the fall. It has since entered the Active Rock charts, even making it into the Top 10. The album was released on March 22 of 2011.

Art of Dying provides examples of the following tropes:
Retrieved from "https://allthetropes.org/w/index.php?title=Art_of_Dying&oldid=1843064"
Categories:
Hidden category:
Cookies help us deliver our services. By using our services, you agree to our use of cookies.