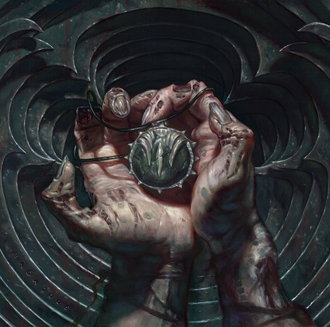 Go ahead, tap its power. It won't hurt you. You'll do that yourself.

The Artifact of Death is an item that will eventually bring about the death of anyone who owns, uses, or comes to be associated with it, often in a grisly and supernatural manner. It can take any shape, whether ancient, toy-like, or high tech. This terrible item is often foolishly sought by many for its "power"... which, of course, always comes with a price: the life of the user. More often than not, it just takes, rather than both giving and taking, typically because it contains a terrible Curse.

Though it has a lot of overlap with the Artifact of Doom, the Artifact of Death doesn't actually need to have a corrupting influence or magical powers, it just has to kill whoever uses it. Also, the time taken to kill whoever uses it varies. In some stories, the Artifact will kill anyone who attempts to use it on the first try. Other stories will have the owner die in a set amount of time, after a set number of uses, or it may simply shave years off a user's lifespan. It can sometimes be an Amulet of Dependency as well.

If an artifact is intended for the Chosen One and reserves its dangerous side effects only for other persons who try to use it, it's an instance of Only the Chosen May Wield (and/or possibly an Empathic Weapon).

Examples of Artifact of Death include:

Retrieved from "https://allthetropes.org/w/index.php?title=Artifact_of_Death&oldid=1531030"
Categories:
Cookies help us deliver our services. By using our services, you agree to our use of cookies.