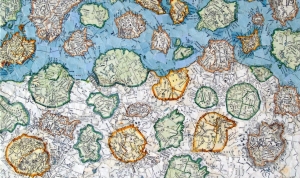 A writer may want to set a story in a location, but that doesn't mean they want or need to be accurate- or even see it. This form of Artistic License can happen in a number of ways. The most common seems to be setting a story in a particular city without consulting a map, thus placing locations that are nowhere near one another quite close by, underestimating the time it would take to get from one to another, and sometimes transplanting whole landmarks from somewhere else entirely.

Lack of knowledge of regional climate can also be glaringly obvious. A rural landscape in Maine does not look like a backlot in in California. Often the lack of knowledge beyond common National Stereotypes results in a Hollywood Atlas or worse.

This trope may not be obvious to anyone unfamiliar with the locale in question, but anyone who lives there will spot it right away, and when it's bad enough it can destroy the believability of the entire project.

Compare Television Geography. If the writer intentionally has a character make geography mistakes, then that's a case of Global Ignorance. Artistic License Astronomy has some examples of this trope, only In Space!

Examples of Artistic License Geography include:

... the desert right outside New Orleans.

Retrieved from "https://allthetropes.org/w/index.php?title=Artistic_License_Geography&oldid=1841949"
Categories:
Cookies help us deliver our services. By using our services, you agree to our use of cookies.