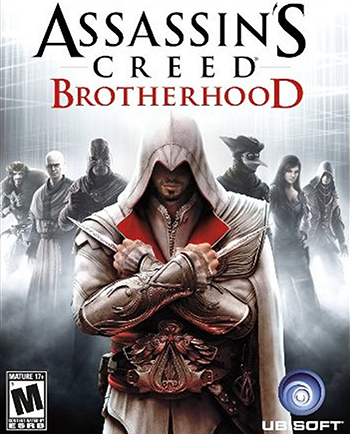 "The liberation of Roma has begun!"

Cesare: The throne was mine!
Ezio: Wanting something does not make it your right.
Cesare: What do you know?
Ezio: That a true leader empowers the people he rules.
Cesare: I will lead mankind into a new world!
Ezio: Che nessuno ricordi il tuo nome.[1] Requiescat in pace.[2]

Assassin's Creed: Brotherhood is the third chronological game in the Assassin's Creed series, but is not a numbered sequel. The game opens in 1499 immediately after the end of Assassin's Creed II, and centers around Ezio's continuous conflict against the power hungry Borgia family and his attempt to restore the Assassin Brotherhood to its former glory. And back in 2012, Desmond and the other Assassins continue their search for the Apple of Eden that Ezio left behind.

Gameplay improvements include a more robust fighting system that allows chaining instant kills together if you don't miss or take damage, riding horses inside the city, and control of larger weapons such as cannons. In addition, multiplayer has been added to the roster for the first time in series history, with the "plot" being Templars in training at Abstergo to think and work like Assassins.

Ubisoft has gotten very involved with the fandom for Brotherhood, hosting videos on a YouTube channel as well as their official website.

The sequel, Assassin's Creed: Revelations, concludes Ezio's story, after which the series resumes being numbered.

Leonardo: I work on this small portrait of a woman, I grow rather fond of it.
Ezio: Do not let a beautiful girl distract you from constructing my designs.
Leonardo: Have no worries, women... provide little distraction.
Ezio: Wait... I don't get it.
(cue awkward looks)

Ezio: Someone my age. Imbecille.
Ezio(moments later while climbing up a wall): Ugh. My back.

Cesare: You cannot kill me! No man can murder me!
Ezio: Then I leave you to the hands of Fate.

Mario: What can I say? We sent a single man against an entire army. I was concerned.

The Harlequin went into town, a deadly man in tights,
Went medieval on some dudes and laughed until they died!
The Harlequin tears it up, the Harlequin is sneaky,
Fills his victims up with fear because he looks so freaky!
The Harlequin jumped off a roof and landed in a crowd,
Before they had a chance to laugh, he took those suckers out!