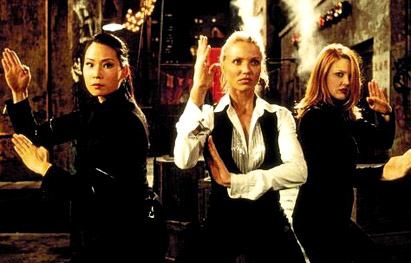 The "en garde" combat stance which is adopted by hand-to-hand fighters in combat, just before opening cans of whoop-ass upon their oh-so-very-dead opponent. Ideally, the stance used should not merely be functional; it must visually convey the message "Your butt, kicked by me."

A common variant is, rather than a combat stance, to smile threateningly as if to say "I'm about to kill you. Very much." A second variant is, faced with a display of force, to simply play The Stoic and exude an aura of "You guys are so toast." Can include cracking knuckles, or cracking the cartilage in one's neck. When kicking someone's ass, it's important to be limber!

Examples of Asskicking Pose include:

Retrieved from "https://allthetropes.org/w/index.php?title=Asskicking_Pose&oldid=1927831"
Categories:
Cookies help us deliver our services. By using our services, you agree to our use of cookies.